The tradition of decorative Christmas villages is rooted in the holiday traditions of the Pennsylvania Dutch. Mass-produced cardboard Putz houses, sold in dime stores, became popular in the mid-20th century, and have also become highly collectible.

Putz villages can be anything from traditional nativity scenes to depictions of entire villages in winter. The term was derived from the German verb putzen, which means “to clean” or “to decorate.” These nativity scenes soon became very elaborate and often included sawdust or fine dirt spread to represent roads leading to the manger; stones and fresh moss to represent grottos or caves; sticks and branches to represent miniature trees.

Although the name can include any figure from these putz villages, the most popular Putz figurines are the Putz sheep, also called stick leg sheep or German wooly sheep. The primitive figures range in size from a few inches to lively spotted sheep with horns, pulling carts, etc.  – all with characteristic stick legs and fuzzy bodies of real wool, often sporting a ribbon collar. 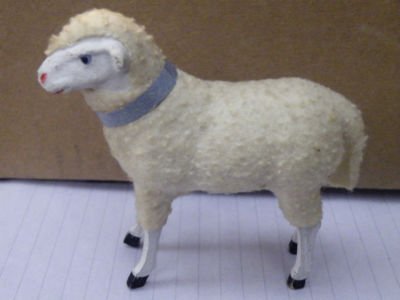 Most of these sheep were not actually intended for nativities. Instead, they were inexpensive toys sold by street vendors in Europe and the USA.

In any case, I think they’re sweet. I want one or two or even better yet, a whole flock of vintage Putz sheep of my very own!