Monday night I made a mistake, well, sort-of. I had two remaining pregnant Shetland ewes, mother and daughter, (from a total of five) still waiting to lamb. Serendipity (aka Sara) and her daughter, Mystique, a first-time mama.

Just so you know, my Shetland sheep basically live in the field/pasture year-round, with modest housing accommodations consisting of several shed-style shelters. As in prior years, I like to bring them into the barn/lambing jug under my watchful eye for safekeeping, privacy… and for any birthing assistance that may be required. Mama and lambs usually remain in closed quarters – that is, in the lambing jug – for several days before they resume total freedom back in the pasture.

Apparently, I brought the ‘wrong’ pregnant ewe into the barn/lambing jug Monday night, past. Early Tuesday morning (at 4 a.m. when I do Round #1 chores), I was greeted by two new lambs IN THE FIELD. Mystique, first-time mama, had already given birth to twin ram lambs. They were dried-off and getting around on their own… presumably already having suckled from mama! I immediately shuffled mama and lambs into a barn stall where they could enjoy a well-deserved rest! Thankfully, all ended well!!??? 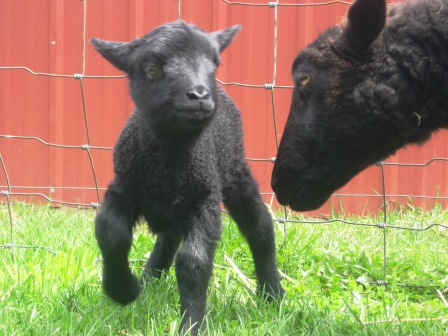 Meanwhile, Sara, who was in the barn (from the night before), was fine at 4 a.m., displaying no impending birthing behavior! However, when I went out to fetch Coriander (my dairy goat) for 6 a.m. milking (Round #2 of chores), Sara had already given birth to twin lambs: one ewe and one ram lamb. 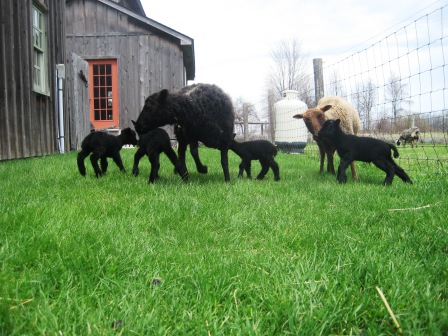 I guess mama didn’t want to be upstaged by her daughter! 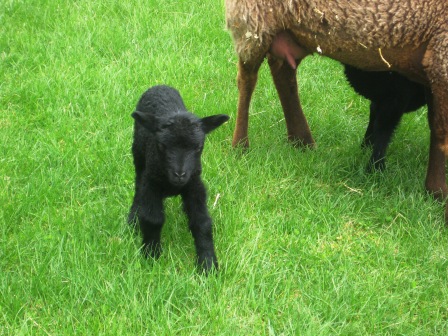 And so the saying goes, all’s well that ends well!! That concludes our lambing season!!! YAY!!