Its origins might go as far back as to pre-Christian days, where goats were connected to the Norse god Thor, who rode the sky in a chariot drawn by two goats. Before Christianity arrived in Scandinavia, the ancient Scandinavians used to celebrate the winter solstice around the same time that we celebrate Christmas today. One of those traditional winter solstice celebrations was the Yule Goat.

The Yule Goat is one of the oldest Scandinavian and Northern European Yule and Christmas symbols and traditions. Yule Goat originally denoted the goat that was slaughtered around Yule, but it’s also a typical Scandinavian Christmas goat figure/ornament made of straw and used as a decoration throughout the home. It is also used about the custom of going door-to-door singing carols and getting food and drinks in return, often fruit, cakes and sweets. “Going Yule Goat” is similar to the British custom wassailing, both with heathen roots.

The function of the Yule Goat has differed throughout the ages. In Finland, the Yule Goat was originally said to be an ugly creature that frightened children, and demanded gifts at Christmas. In Scandinavia, people thought of the Yule Goat as an invisible creature that would appear some time before Christmas to make sure that the Yule preparations were done right. During the 19th century its role shifted towards becoming the giver of Christmas gifts, in Finland as well as the rest of Scandinavia, with one of the men in the family dressing up as the Yule Goat. The goat was replaced by jultomte or julenisse (Father Christmas/Santa Claus) at the end of the century, and the tradition of the man-sized goat disappeared. 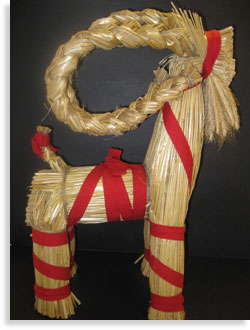 The Yule Goat, made of straw and bound with red ribbons, is a popular Christmas ornament in Scandinavia and a beautiful example of a craft common throughout northern Europe. This craft goes back to pagan times when straw figures were made from the last sheaves of grain to provide a winter home for the spirit of the grain. These “corn dollies” were ploughed into the first furrow in spring, releasing the spirit to live once again in the growing grain.

In older Scandinavian society a popular prank was to place a straw or wood Yule Goat in a neighbor’s house without them noticing; the neighbor then had to pass it on in the same way.