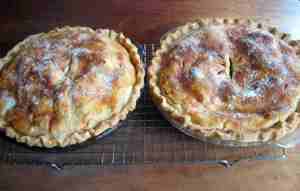 You know it’s Fall when…you have a taste for fresh, hand-made apple pies…YUM! Mama always said apples were sweeter after the first frost! Since we had our first ‘heavy’ frost last week, I decided it was time to visit our local orchard – conveniently located 5 minutes from my house – and pick some apples. I used Northern Spy for my pies; peeled, cored and sliced. Add sugar and cinnamon to taste. I also toss in a handful of raisins like my grandma used to do, dot with butter and cut slits in the top crust for the steam to escape. I also brush the top crust with an egg wash (1 egg with a little fresh goat’s milk/or cream) and sprinkled with a little more sugar – makes a nice brown crust!

The pie dough is an old family recipe – never fail, hearty crust. Here’s the recipe: Makes two 9-inch double crusts. Mix 4 cups flour, 1 – 3/4 cups Crisco, 2 tsp salt, 1 T sugar ’til pea-size. In another bowl, beat 1 egg, 1 T apple cider vinegar and add 1/2 cup water. Slowly add liquid to flour mixture and mix with fork ’til it holds together in a ball. Refrigerate/chill before rolling out your crust.  Generally, bake at 400 F for 10 min and reduce the temp to 350 F and bake another 30 minutes or so until the crust is golden brown and the pie filling is bubbling. Makes a great crust for pumpkin pie too!